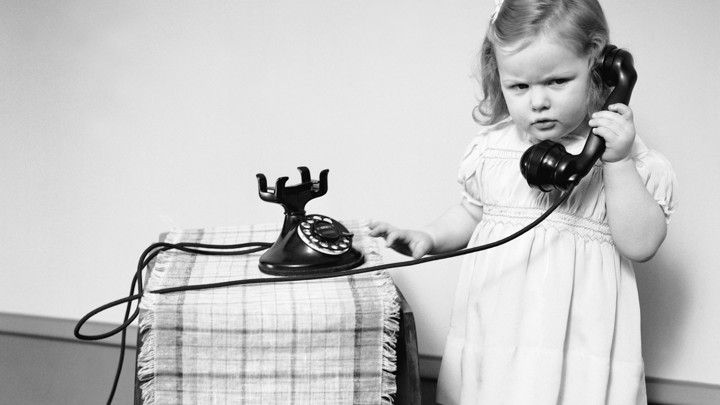 I hate talking on the phone. When I was a teenager, I was like all of the others – I would talk on the phone for hours and hours with friends and girlfriends – I even had my own touch-tone phone in my bedroom. I became an adult, and I entered into the workforce as an IT Support person. My job became answering the phone, helping people with computer issues – most of whom were already irritated by the time they heard my cheery voice – subjecting myself to verbal abuse for 8 hours a day. This made me grow to hate the phone.

Couple that with a vast change in my personality during my 20’s – I went from being the “social butterfly” to becoming extremely introverted. I would have 1 or 2 good friends, and that was all the socializing I needed. These friends knew not to call me unless they had to, and with the emergence of text messaging, my time speaking on the phone almost evaporated away completely.

The only place I ever felt comfortable, other than with my wife, was, of all things, on a stage. I was perfectly fine speaking, performing, doing just about anything on a stage in front of thousands – just as long as I didn’t have to talk to anyone afterward. Being a drummer lent itself to this attitude – I could hide behind the drum kit, and hopefully most people would not recognize I was even there. This feeling and comfort remains with me to this day.

Over the years, I’ve learned that God has a tendency to pick at the things outside of our comfort zone. About three years ago, I started to feel a tug on my life – that God was telling me it was time for me to do something. I had no idea what that might be, but was terrified about the direction it would go. I spoke with my Pastor at that time, telling him that I felt God was calling me to do something active in ministry, but I did not know what. Rather than advising me or giving me suggestions, he asked me a simple question:

Action. It simply was not enough to recognize God’s call – I had to pursue it with intentionality. I didn’t want to, and I figured I could sit on it for a while until I was confident in my own brain that I had “figured it out” and then I might take a step in that direction. However, God doesn’t usually concern Himself with what I have figured out. This became especially evident the very next day after speaking with my pastor – when I received a call from Dave Eloe asking if I could fill in at Trinity Baptist Church as worship leader while they searched for a new Worship Pastor.

I felt ill-equipped. I had played guitar only a few years, and had never been accused of having a great voice, but I figured that maybe this was something I needed to do – just as my pastor had asked me. Now, almost 3 years later, I have been the Worship Pastor at Trinity for more than 2 years.

Have you ever felt the stir toward ministry? Maybe that ministry is working as a pastor or counselor, or maybe it is to help clean toilets at the church. Maybe it is to share the gospel with a coworker, or maybe to write letters to church newcomers. God calls us to a multitude of things, things that we may see as big or small. Often that calling fits solidly with our personality, while other times, like in my case, the call is to rise above a perceived weakness. Regardless, a call from God is a call to further the Kingdom, whether you are preaching to thousands or pulling weeds outside the sanctuary.

I have had several people come to me and tell me that they felt called to become a part of the Worship Team. Some have served without break for several years, some have taken time off, but a start or a return always starts the same way – a calling from God. In my experience, when you are called by God to do something, and you run from that calling, it turns out that God is a much faster runner than you. When I considered the idea of being a Worship Pastor, I felt strongly that I was not talented enough and had no business being out in front of a team. Over time I saw God equip me – both from the standpoint of musical ability and through the overcoming of my uncertainties.

Once I settled in to this new position in life, I felt that I was where God wanted me. That is, until about 3 months in when I felt that pull again during a sermon that had absolutely nothing to do with what was happening in my heart. Now, I know that I am called to minister full-time, and have had that confirmed by others. My reaction? Terror – again. I look at the mountain I have to climb through schooling and overcoming my introverted nature and it seems insurmountable to me. But this call is undeniable – I have to do something. So I begin from the bottom – and attend seminary this fall. Sure, I’ll be in my 50’s when I’m done, but I’ll be in my 50’s anyway, so I might as well get there by following His call.

The Bible has numerous passages and stories that tell us, in a nutshell, that God does not call the perfect. He does not always call those who seem best suited for a certain task. It is a heart condition – he calls those who are willing to say “Here am I – send me.”

Do you feel a tug on your heart? Have people told you, in one way or another, that God is calling you to something different than your current life situation?

Ok, so what are you going to do about it?