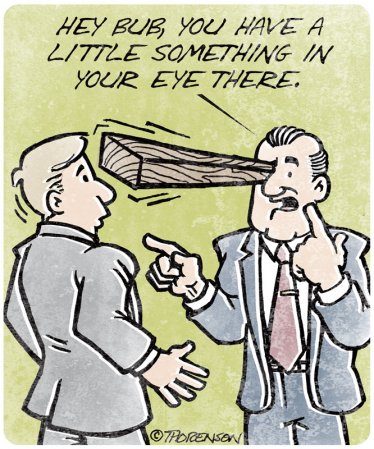 One of the stranger things about being a pastor is in the books you read. While we are used to hearing our pastor’s interpretation of scripture through the weekly sermon, for those of us studying deeper, we tend to be confronted with multiple commentaries, break-downs, and opinions around the same idea or verse. This is a great thing for a person trying to increase knowledge and understanding around biblical principles.

Every so often though…you read that statement or thought that resonates – that makes scripture come alive – and you are profoundly impacted. And for me, it is usually incredibly unpleasant, because it points out my folly in a way that I cannot argue circles around.

Let’s take a look at the latest 2x4 to the head that has altered my perception – which, if you ask me, is far too poignant a point for so early in the year.

We live in an interesting political climate. Watch any entertainment award show – they are a great example of what we are being told to champion by the Hollywood elite. Look at the heavy-handedness around tolerance being dealt by the incredibly intolerant. In this age more than most, we have so many things to point out as immoral, intolerant, backwards, and just plain hateful.

Matthew 7 wraps up Jesus’ sermon on the Mount. He begins this segment talking about judging others – much like I just did in the paragraph above. You know the story – don’t worry about the speck in someone else’s eye when you have a plank in your own. I have heard this countless times, heard it many different ways (pot calling the kettle black, for instance,) and have always taken it to mean to watch for hypocrisy in myself.

I missed the point.

Just a few verses prior to this passage, Jesus talks about our eyes in way that I have always had a tendency to gloss over. He calls the eye the “lamp of the body” and explains that clear eyes allow the body to be filled with light. But if the eyes are unhealthy, then the light within is darkness – and vast. Is there a more unhealthy condition for the eye than a log stuck in it?

I come to my point: I have been reading a novel by a Christian author – historical fiction, wherein his own interpretation of scripture passages are voiced through the characters of his story. And when one of the characters is there, in Capernaum, to hear this very sermon, this is her response:

We are meant to be in this world and not of it. My anger toward social injustices (real or imagined,) moral flexibility, and ignorance are damaging me – because I allow it to. God has called me to be a light; to be Jesus to this world – and Jesus didn’t sit around with His coworkers and talk about how the world is circling the drain. He responded to these exact same circumstances with love – even to the point where they thanked Him for it with crucifixion.

Here is a resolution for all Christians in 2019 – remove the plank of grievance from your eyes. Don’t be caught unaware, but recognize that hiding behind our own self-righteousness does nothing to help the broken, lost, and hurting. Remember that God loves the person spouting hate speech and turning morality on its head the same as He does you, and that person doesn’t owe us anything. Quite the opposite – we owe them love, acceptance, understanding, and truth. This is how we be the light we were called to be.