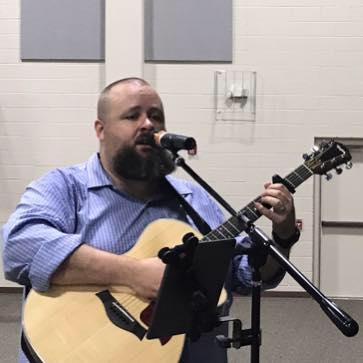 Pastor Rob has been leading worship at Trinity since October of 2016. Beginning as a fill-in leader, he was brought on staff in June 2017 and ordained in October 2017. Originally from Southern California, and then 12 years in Arizona, Rob moved to Colorado with his wife Eleia and his 2 daughters Kahlan and Arianna in September of 2013. As a part-time staff member at the church, his day job is with the State of Colorado Governor's Office of Information Technology. Rob loves to spend his time playing any number of instruments, and he collects vinyl records and baseball cards. An avid sports fan, he's always ready to talk about the Rockies and Broncos, especially over steaks. Rob is currently enrolled at Gateway Theological Seminary and is working toward his Masters of Divinity over the next several years.

Join us Sunday at